The wearable technology market has just got a big boost and a sense of validation from the world’s biggest e-retailer, Amazon. The US e-commerce giant has announced a dedicated store for Wearables which features the largest selection of items from top brands including Samsung, Jawbone and GoPro. It’s not that Amazon didn’t have these items on their store before, but they are making it easier to explore and access these devices. 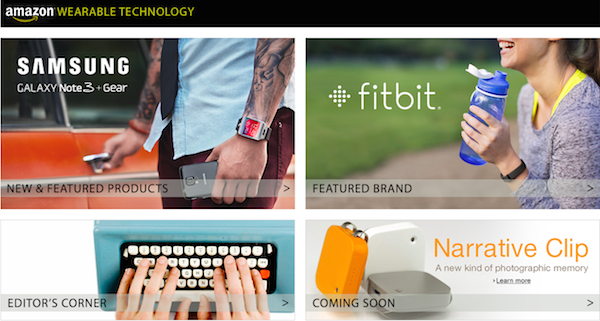 In a press release today, Amazon announced the launch of Wearable Technology Store – which neatly lists and catalogs several wearable devices like smartwatches, fitness trackers, wearable cameras and many more. In addition to established brands like Samsung and Jawbone, Amazon’s wearable tech store features items from startups like Basis, Narrative and Misfit.

For an emerging tech like wearables, this should come as a boon. Though the technology has been around for a decade, people have begun to take note of wearables only recently. Crowdfunding platforms like Kickstarter and Indiegogo have tremendously helped the wearable tech space to innovate and get started. But the wearables ecosystem need backing of biggies like Amazon in order to reach the masses. Amazon is doing its bit to let people know and explore variety of wearable devices –

Amazon has some neat buying guides for Smartwatches, Activity trackers and wearable cameras. We shall be soon sharing the best deals we come across for wearables on Amazon, so stay tuned.

2014-04-29
+Raju PP
Previous: These Sunglasses Will Know When You Leave Them
Next: Liquid Leap : Acer walks into the World of Wearables; Keeps it locked, Literally