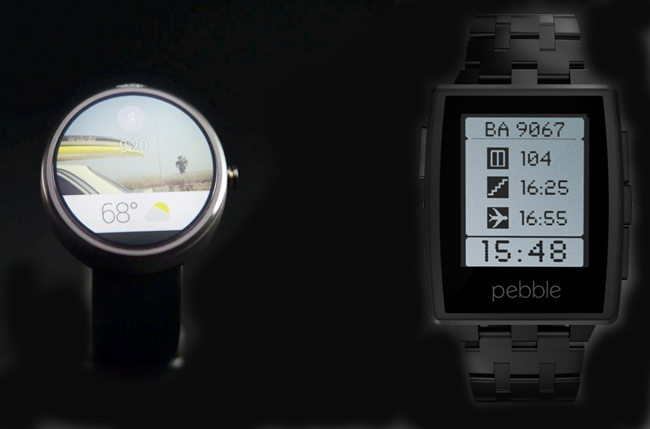 When it comes to wearable computing devices, the smartwatch has been my first and possibly only preference. After using the original Pebble for nearly a year, I’m extremely eager at the prospect of Android Wear. That’s because right now I can’t help but compare all the things that Android Wear can do, that my Pebble can’t. In fact, the Pebble experience worsened for me after I made the switch from iOS to Android.

So, why is Android Wear the best fit for Android users when compared to any existing smartwatch platform? Here are the reasons —

While using the iPhone, notifications were seamlessly delivered to my Pebble thanks to the Apple Notification Center Service (ANCS) API, which was introduced in iOS 7. Every notification that came to the phone showed up on my wrist. But unfortunately that stopped when I switched to the Moto X — the Pebble now fails to deliver notifications from all apps. In my observation Mailbox, Twitter are just a few apps the notifications of which just don’t show up. It is pointless to wear a smartwatch when your phone vibrates in your pocket and you’re left wondering what it could be.

It’s not just about notifications — I feel the way Pebble works with iOS is not the same story with Android in general. You can’t answer calls from the watch in Android, you can’t read the content of WhatsApp messages (it just says ‘You received a WhatsApp message from whoever’). Things also seem a little buggy — sometimes music will start playing many seconds after pressing the play button on the wrist (sometimes it just won’t). Sometimes the watch keeps buzzing with a call notification even after you’ve picked up the call.

But fortunately with Google at the helm of both the smartphone and the smartwatch operating systems, it is fair to expect these issues won’t be faced. Ashish reported all notifications to be accurately delivered after using the LG G Watch.

While the Pebble was designed as a second-screen experience; as a method to glance through notifications, Android Wear is a two-way street. By using Google’s accurate speech-to-text recognition, you’re able to reply back to a conversation or take actions straight from your wrist. And it’s not just the built-in apps like SMS or Hangouts, we’re already seeing third-party messaging services like WhatsApp and Facebook Messenger also provide the ability to reply to IMs.

And speaking of interactivity, Android Wear does one thing beautifully that Pebble possibly just can’t do — the moment you clear a notification from your wrist, it’s cleared from the phone’s notification drawer too! Right now with the Pebble, I’m usually left clearing notifications from the phone, despite having seen them on the watch.

The Pebble app store is stocked with a fair variety of 3rd party apps. But you can’t beat the ease with which app developers are able to make their existing Android apps work with Wear. We’re seeing more and more relevant apps taking interest to Android Wear (including WhatsApp, which has been a laggard in adopting new features). The video below demonstrates how easy it is to make your app compatible with it:

The result? It won’t be far long before every other app on your phone is smartwatch-friendly. Plus, with Pebble you have to install the Watch app from their app store separately (some apps also require you to install an accompanying phone app). But with Android Wear, if it’s on your phone, it’s on your watch — no additional installation necessary!

There’s no doubt that the Pebble’s e-paper display is the most legible under direct sunlight (where the first crop of smartwatches are said to fail, thanks to their traditional phone-like displays). But as darkness fills up your surroundings, the readability on the Pebble is less than optimal. It has an extremely faint backlight that makes content just about readable. Plus, it’s display is smaller and of a lower resolution. In comparison, first-gen Android Wear products like the Samsung Galaxy Gear Live have an Retina-esque 278PPI pixel density, resulting in a crisper display. And then there’s the colour.

Well, you may feel it is unfair to compare the Pebble to Android Wear, since it is like comparing a Kindle e-paper reader to an iPad. You’re right but if you look at the pricing, they both aren’t that far off. The Samsung Gear Live costs just $50 more than the regular Pebble. And if the Moto 360’s rumoured price is to be believed, it won’t be far from the Pebble Steel’s $249 price tag. Thus, if Android is your platform of choice for your smartphone, then Android Wear is a very promising wearable platform to pledge your allegiance.

Rohan Naravane is the Content guy for PriceBaba. It is pretty evident from this post that he’s a smartwatch-er. He can’t wait for the time when he doesn’t have to take the phone out of his pocket till it is absolutely necessary.

Previous: Toshiba Launching Fitness Tracker; Lasts for 2 Weeks
Next: Moto 360 is Priced at $249 as Per Best Buy Leak; Detailed Specs Revealed as Well