Home » SmartWatches » Everything You Wanted to Know about Apple Watch

Everything You Wanted to Know about Apple Watch

Apple officially announced the first wearable from the company, that the world been waiting for — Apple Watch. As Tim Cook shared features and the vision of wearable and why they designed it the way it is, here is everything you should know about the watch.

Instead of round, Apple chose a rectangle shape with curves around the edges of the body. Like traditional watches, it comes with a crown which will be one of the most used hardware button of the watch i.e. Pinch and Zoom, scroll a list,  and also the button to take you to home screen when you press it. Apple Watch comes in two sizes. 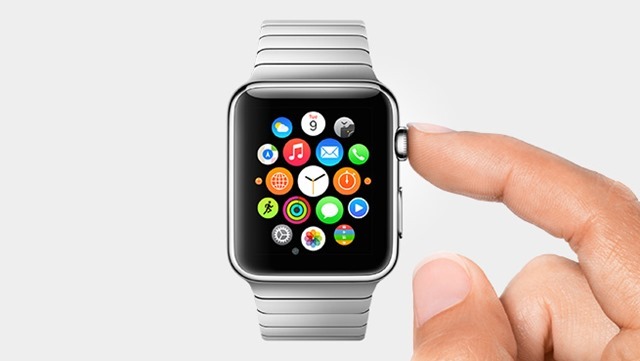 The screen of the watch is a touch screen which is built of sapphire glass and it also senses force along with touch which is more like a right-click of mouse and touch pad useful to initiate extra menu like change watch face. This is achieved by a tactic engine in the watch. 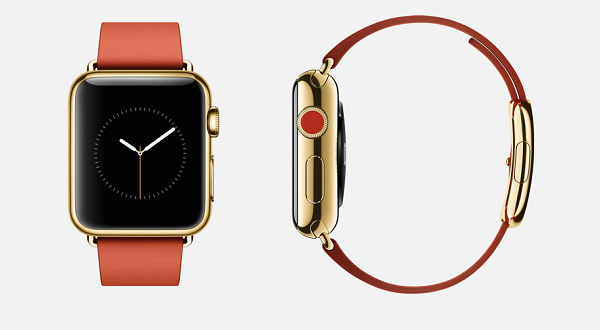 Almost of the size of the pebble steel, it comes in three editions, Regular, Sports and Apple Watch Edition. The later is an 18 carat gold version along with Silver and Gold with different type of watch straps. The sports collection of watches come with aluminium casing. Pebble Steel anybody?

There are total of six different straps which fit in a specific kind of slot i.e. you cannot put your own strap there. There is soft leather strap, a stainless steel strap and even sports straps.

The watches are water resistant which could stand splash of water, but you should refrain yourself from swimming with it. The watch can be charged using a wireless charger which is magnetic and attaches itself to the back of the watch.

Interface & How to use Apple Watch

The home screen of the watch appears to be a series of dots that you can pan in and out  using the crown or anything like collection of picture and so on. To launch app, just touch it and to come back to home screen, press the crown which is very similar to how home screen button works on iPhone and iPad.

A new gesture called as the “Force Touch” lets you choose a new watch face and customize it. This is very similar to Android Wear as well but they add in extra info which you can customize by tapping, swiping for more information or just for touches. I think this is the standard way to do anything on watch. 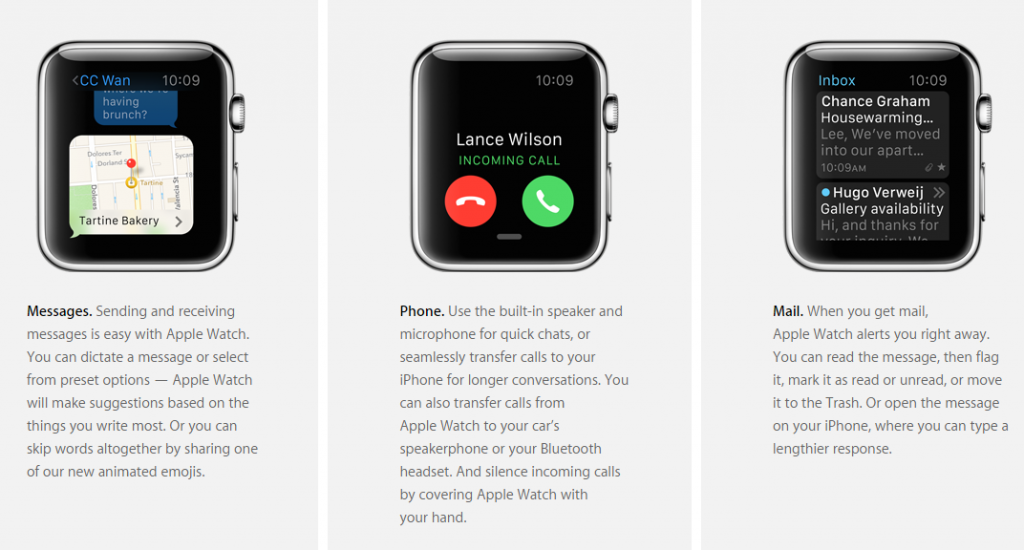 The watch needs to be connected with the iPhone all the time. The notifications are glanceable and you need to swipe to get more info or interact. The  bring this up, you need to swipe up and then swipe horizontal.  The watch glows up as you raise up your wrist to look at time or the activity.

Also very similar to Android Wear, the only way to reply back or send a text is using voice or emoticons. The reply to SMS is smart enough to break down important things to be immediately used as a reply.

Interestingly, the watch can communicate with each other by sending something you can draw on the watch. You can even send across your heart beat and the other person gets vibration in the way you heart is beating. This is achieved using the big button placed under the crown but if it can do anything else, is not known.

Last but not the least Siri is built into Apple Watch.

Third party developers can also make apps for the watch. While the watch supports all notifications, developers can extend that notification using Apple’s WatchKit. This gives the developer ability to add actionable notifications and detailed glances. You will be able to tweet from the watch or like a post, see airline flight information and so on.

Looking at the webcast we figured that there is a Pinterest app, a BMW app, MLB , Honeywell and a Nike app.

On the rear, there are four round lenses which is used to track your heart rate. While two act as light source, the other two are sensors which recieve the infrared light and then things are analysed.  This turns Apple watch into a comprehensive health and fitness device. There are two apps, Fitness and Workout. the HRM monitor or the LED in the back checks on hear rate. The watch has an accelerometer but uses iPhone’s GPS. The apps can measure calories, duration and distances. 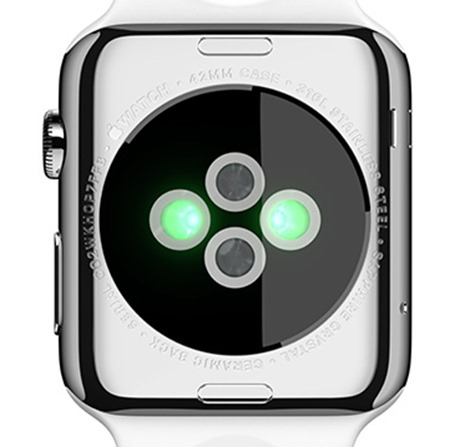 You can analyze how much of your time is spent on working out, walking or even sitting.  The different rings of the app shows you movement, exercise, and stand time.

Although Apple didn’t mention the expected battery life, they hinted at an ‘all day usage’, which possibly indicates a day long battery life.

Previous: Apple Watch Announced; Coming Early 2015 for $349+
Next: Has Apple Managed to Nail it with the Fashion Aspect of its Smartwatch?