Home » Wearables » Apple Watch Will Not Give Android Wear Sleepless Nights… Yet!

Apple Watch Will Not Give Android Wear Sleepless Nights… Yet!

It is official. And it will be coming our way in early 2015. But for all the promise it offers, we do not think that the Apple Watch rings the death knell for Android Wear as some pundits would have us believe. And here is our rationale: 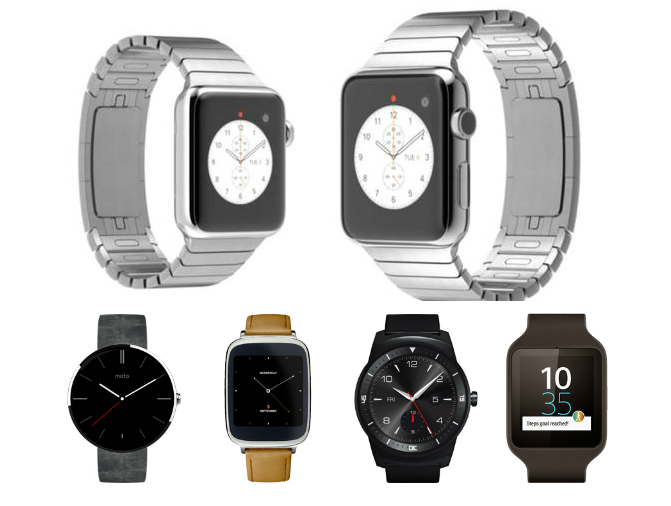 Yes, we know that there are a lot of people swooning over the looks of the Apple Watch, but there are quite a few who do not seem too impressed either. Yes, we love the blend of Sapphire glass and metal and the watch straps looked VERY impressive but we did see people utter the Moto 360 word time and again. So yes, Apple does seem, to have ticked a lot of design boxes but unlike in the case of the iPad, iPhone and iPod, it does have competition here. And we have not mentioned the rather nifty looking LG G Watch R.

The price… is high

One of the glorious myths perpetrated about Apple is that its products have always been uber expensive. Not quite so. The MacBooks were among the most affordable notebooks for their configurations, the iPad was for a while the most affordable 9.7-inch tablet, and the iPod Classic’s price-to-GB ratio was pretty much unbeatable for a while. So yes, we did think that Apple might just surprise everyone with a relatively lower price for its Watch. That, alas, has not been the case – at USD 349, the Apple Watch is an expensive proposition, a full hundred dollars upwards of the price tags of the Moto 360 and the Pebble Steel. Android was able to make significant inroads into the iOS crowd with its lower priced devices. That could happen in wearables too. Even as we write, the price of Samsung’s Gear Fit is down to about USD 150 from some retailers in the Indian market.

Right, we wrote “complexity” and we are talking about an Apple product. Yep, we appreciate the irony. The stark fact, however, is that in terms of interface, the difference between the Apple Watch and its Android Wear counterparts is not as vast as some had thought. The Apple Watch actually has an interface that is a mix of taps, swipes, dial rotations,screen and button presses and sketches…oh, and voice commands. No, we have not actually used the device, but even during the demos, this did not seem the most intuitive watch to use. No, we are not saying Android Wear is easy to use either, just that the ease of use edge that iOS has over Android in phones and tablets does not seem to have carried over to the wearables department, where things seem more evenly matched.

We had expected the Apple Watch (or the ‘iWatch’ as everyone insisted on calling it in Ze Age of Ze Rumours) to be largely a stand-alone device, with the option to sync with an iPad or iPhone being an add-on rather than a necessity. That, alas, is not the case. A lot of the functionality of the Apple Watch will come from an iPhone – and that includes most of the fitness stuff, as it depends on the GPS of the iPhone. That pretty much restricts it to the iPhone only crowd. A person with an Android or Windows Phone device will not have much use for an Apple Watch. That’s missing out on a bit, we think. Yes, we were not expecting support for Android, but had the device been a stand alone one (a bit like the iPod), we think a lot more users would have been tempted. As of now, it is good only if you have an iPhone 5 or higher – Android Wear has nothing to fear really, as that is not a segment that the Apple Watch will be targeting. And Android user wanting to try an Apple Watch will have to buy both an iPhone and the Apple Watch!

We did not hear much about this feature of the Apple Watch and honestly, are concerned about rumors that it will need something in the vicinity of a charge a day to keep it ticking. And judging by the number of sensors, the NFC and Bluetooth connectivity, the retina display and of course, the need to keep the watch connected to the phone for optimum performance, well, we do think that the difference in battery life between the Apple Watch and its Android Wear counterparts is not likely to be that great. Mind you, we are not ruling out Apple’s pulling off a surprise a la the iPad and iPod’s battery lives here, but all the talk of “it can be easily charged every night” gives us the “a charge a day” feeling. That again is not much of an edge over the Android Wear crowd which also subscribes to the same “daily charge” philosophy.

Checking the news and weather, getting mail notifications, dictating notes and messages, getting directions, handling calls, tracking fitness, and a whole lot of other functions that were available for the Apple Watch do exist on Android Wear devices. Yes, we expect Apple to implement them with exemplary elegance, but in terms of functions and feature set, we have to bluntly honest and concede that the Apple Watch does not exactly have a massive edge over the current lot of Android devices.

No clear app edge either

Android Wear has a head start here and the fact that the Apple Watch will come into the market in 2015 gives it just that much more time to build up its app advantage. Mind you, given Apple’s formidable track record in this field, Android would have its hands full whenever the Apple Watch arrives, but yes, for now, Android Wear has the opportunity to build up a formidable app reservoir. Whether it will avail of it or not is another issue, but it has a wide window of opportunity, something it did not in the case of the iPhone and iPad.

As matters stand, Apple’s Watch does not really have any massive edge over Android Wear the way we see it, and is actually restricted to iPhone users in its current avatar. Yes, we would like to stress that these are very early days. Apple still has time to work on the Apple Watch and in all probability will do so – we can expect a flurry of very good apps and improved battery life by the time the watch finally hits the stores in early 2015. The important point to note, however, is that unlike in the case of the iPhone, iPod and the iPad, Apple does not really have the first mover advantage here, and while it will be using the time between now and its launch to fine tune the Apple Watch, Google is unlikely to sit still, and we are likely to see further improvements in Android Wear. All of which points to one very interesting battle in the wearables arena come 2015. No, we are not going to predict any winners, but are certainly going to paraphrase Byron and say that the rumors of the death of Android Wear have been exaggerated.

This was a guest post by Nimish Dubey who is a freelance writer on technology, music, sports and books.

Previous: Has Apple Managed to Nail it with the Fashion Aspect of its Smartwatch?
Next: LG G Watch Gets a $50 Discount, Now Priced at $179

Selected few authors who are experts in their fields are invited to write guest posts on Wearables Arena, and they help in bring an outsider/fresh view to things on Wearables and IoT.