Apple’s Tagline for Sep 9th Event Invite Hints at a New Wearable; Time for the iWatch?

Apple has started sending out invites for a media event scheduled for September 9th 2014 with a tagline “Wish we could say more”. September has been set aside for the new iPhone launch every year, so we can expect the iPhone 6 in multiple sizes to be unveiled at the event. But the subtle hint with the tagline makes us hopeful (more than ever) about a new product offering, which most probably will be a wearable. 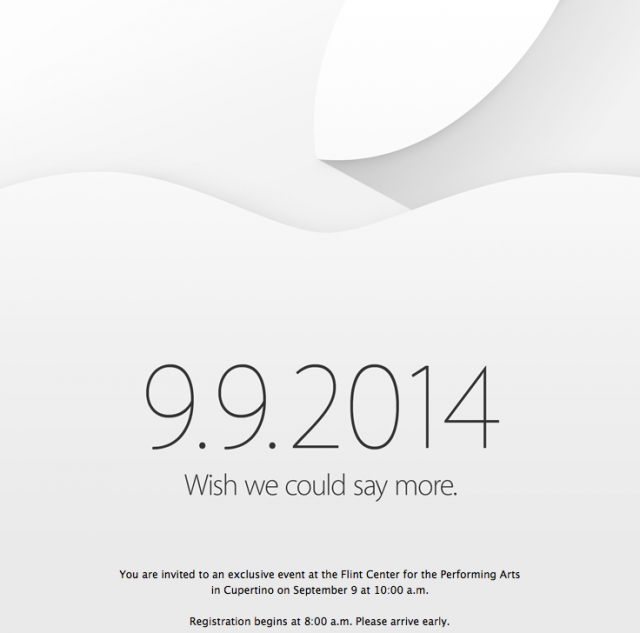 Also, the company isn’t holding the event at Yerba Buena convention center in San Francisco or its campus, but at the Flint Center, where its corporate HQ is located. That’s an interesting choice for the venue. From what we can gauge from reactions on Twitter, Apple seems to be inviting a lot many people from the press than usual.

Tim Cook has been quoted talking about new product categories in the recent past, but unlike the iPhone 6, which has been leaked multiple times, there’s hardly anything worthy which has leaked with regards to the wearable. Apple did talk about the new Health Kit feature briefly during iOS 8 unveil at WWDC, which set the expectations for a wearable high, but that’s about it.

We did see Apple hiring some senior medical technology executives probably from biotechnology field sometime back, and also some people from the fashion field, all of which indicated about their keenness to get into the wearables arena (pun intended). But the question has been, will they have something significant to showcase at the Sep 9th event.

Wish we have enough to say more on September 9th.