Can MyFitnessPal Deal a Death Blow to Generic Fitness Trackers?

Posted by: Ashish Mohta in Health and Fitness May 2, 2014

A powerful processor can solve a lot of problem, be it recording a 4K video or drain less battery. Snapdragon 801 and 800 are classic example of these. When Apple announced iPhone 5S, one major feature was a topic of hot discussion–the M7 processor’s ability to track movement and activity.

While the hype died off as there was nothing that could use it to track data until today. MyFitnessPal, one of the first mobile apps which started tracking food intake is expanding its area by tracking your steps as well.

The bigger news is with iPhone 5S users, where the steps can be tracked using the M7 co-processor. This helps you get rid of any fitness tracker you had and just use your mobile which you would carry all the time with you. The data is synced only when you sync data with MyFitnessPal which means you would be able to see accurate data only by end of the data. 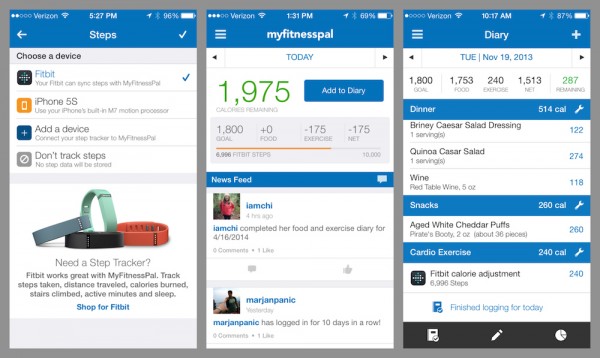 How much it impacts on Generic Fitness Trackers?

iPhone has a big fan following and loyal customer which means the user base is big. While iPhone hasn’t really changed, if it can start providing additional  value to users, it can make its fan still stick.

This gives a direct challenge to fitness tracers like Fitbit, Jawbone and so on. Why ? The casual iPhone users who wanted to buy tracker would completely skip it because now an app can do it and they don’t have to pay anything. The delayed might not impact much because for them fitness tracking is casual.

The recent rumor of iPhone to come along with ear buds which have this tracking and HRM inbuilt, adds more weight to the competition because they would literally need nothing. Those who would love it, will go for iBand from Apple itself.

Fitness Trackers are here to Stay

That said, it might get a little tougher for Fitness Tracker eventually as more smartphone start putting their idea on similar lines but from a professional perspective, I believe the fitness trackers will stay. The reason is because it’s a dedicated device, delivering data  live and on demand. There is no delay and there is no impact on your battery life.

Its going to be an interesting battle as wearable grow and change forms. What do you think?

2014-05-02
+Ashish Mohta
Previous: Is Samsung going to Announce a Health Platform on May 28th ?
Next: Vidameter : Fitness Tacker which also tracks your Vitals & Prepares for Emergency