Just yesterday we spoke about Metaio releasing its true augmented reality SDK for developers, and today we already have a smart glass powered by the same technology. Epson has just launched the Moverio Smart Glasses powered by Metaio, and you can own one by shelling out $700. 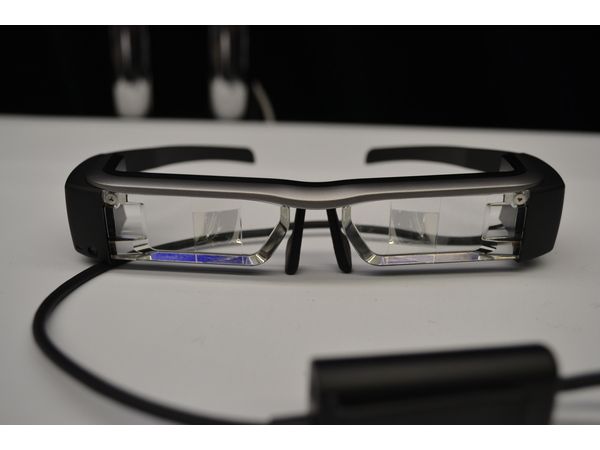 Context-specific augmented reality has been the most promised and most interesting feature of wearable smart glasses. Unlike Google Glass, which basically provides a layer of notifications and other content, Epson Moverio projects content up onto the see-through lenses so they are inline with the real world you are viewing. The Moverio BT-200 is powered by Metaio, who has been a pioneer in the Augmented Reality space.

The Moverio BT-100 is the last glass you would ever think of buying if style or fashion score high up in your priorities. Unlike Google Glass, the Moverio comes with two screens, and costs half the price as the Explorer edition of Google Glass. Epson says the glasses are the visual equivalent of having an 80-inch TV strapped to your head. So this isn’t something you’d like to wear while walking.

Moverio runs on Google’s Android 4.0 (Ice Cream Sandwich), which is almost 3 years old now. It also comes with motion sensors for head tracking (gyro, accelerometer, compass), Bluetooth connectivity, interchangeable lenses and a front-facing camera. Being an augmented reality glass, Moverio requires the use of a handheld touchpad to operate. Running your thumb along the touchpad controls a mouse cursor you see on the display sitting directly in front of your eyes.

Moverio comes with removable batteries and removable storage. The battery life stands at a deplorable figure of just six hours, but being removable should come as a respite. The storage is via the microSDHC slot. Moreover, it supports prescription glasses as well.

Unlike Google Glass, Eposon’s Moverio is not aimed at normal consumers, instead it’s meant to be used at workplaces and possibly at markets like healthcare, logistics, field service, energy, manufacturing, education, retail, and more. Metaio, which powers this product has just opened up the SDK for third party developers, so Epson is hoping that there are more interesting apps which can come out in the near future.

The wearable technology is still in its infancy, and considering that, Epson’s Moverio BT-200 is surely a giant step forward. Interested parties can buy one on Epson.com or Prelauncher.com for $699.99