How to Squeeze Every Drop of Your Android Wear’s Battery

If you’re the owner of an Android Wear device, its battery life is probably one of the biggest inconveniences you have to deal with. It’s no secret that modern smartwatches have become yet another burden to their owners, since along with smartphones and laptops, they need to be charged daily too. I’ve been using the worst one of the lot, the Moto 360, which except for the classy design is a wuss when it comes to battery life, thanks to an old TI OMAP3 chip and a comparatively small 310mAh battery. In the past 6 months of usage, I’ve tried many possible ways to conserve juice so that it doesn’t unexpectedly die out on me. Here are a few that I’d like to share with fellow Android Wear users:

1. Put it in Theater mode when not in use

‘Theater Mode’ was introduced with the Android Wear 5.0 update as a way to prevent the display from lighting up in a dark theater every time you moved your wrist, thereby disturbing fellow moviegoers. Also updated was the notification mechanism, which now syncs the alert status to Android Lollipop phone. Meaning, if you choose ‘None’ in the interruptions on the watch, your phone will also go into silent mode.

This is where theater mode comes in handy for more than just when you’re in a theater. There may be times when you’re not using the watch and have kept it nearby (at a desk maybe), but your watch will still keep lighting up and vibrating when any notification comes through. At such times, turn on the theater mode. The watch will go to sleep till you explicitly turn theater mode off. Also this way, your phone doesn’t go into silent mode.

2. Put it in Airplane mode when phone is away

Then there are times when you’ve stowed the watch away inside a drawer or a bag; basically at a distance where the phone can no longer maintain a Bluetooth connection to it. This is the time when the baby watch will constantly try to look for its papa phone, draining battery faster as a result. There have been many a times when I’ve kept the watch with half the battery inside a drawer at night, only to find it dead in the morning.

This is the time when you’re better off putting the watch in Airplane mode, which will prevent it from trying to constantly seek a connection to your phone.

There are a few people who crib about how modern smartwatches don’t have an always-on display, like a regular watch. I have never faced any inconvenience when the display of my watch turns off after a few seconds. The 9-axis accelerometer is accurate enough to light up the display when I tilt the hand, and very seldom does it turn the display on otherwise.

Unless your smartwatch comes with an OLED display and you’ve set a dark watchface where only a few pixels are constantly lit to show the time, there doesn’t seem to be any need to use the ‘Ambient mode’ that keeps the entire screen on at all times.

There are many interesting watchfaces on the Google Play store for Android Wear. Many of them show interesting information (other than date & time) like weather, phone/watch battery percentage, even a speedometer! But be careful while trying out many of these watch faces, as in my experience, I’ve observed a noticeable drop in battery, especially when using a feature-rich watch face. 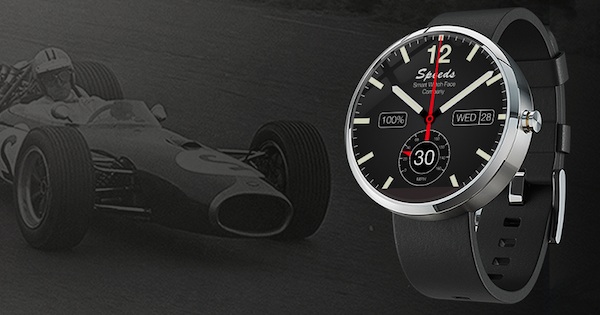 At this point you’re probably questioning the purpose of buying a ‘smart’ watch, but again, using third party apps on Android Wear do tend to drop the charge considerably. When I say third party apps, I am referring to apps that run independently on the smartwatch, apps like 3rd party fitness trackers, listening to music using a bluetooth headset etc. Then there are many Android apps have simply enabled input actions for the notifications that their app show up on the watch (for example, replying to a WhatsApp message or archiving an email). The latter don’t seem to have any impact on the battery life.

There may be some apps that repetitively send you notifications that aren’t important enough to keep your wrist buzzing, along with your phone. Fortunately, the Android Wear app has the ability to ‘Block app notifications’, where you can add such apps to a blacklist. For instance, I’m page manager to a few Facebook pages and I need not be alerted of every activity on my wrist, so I’ve added the Facebook Pages app to the blacklist. 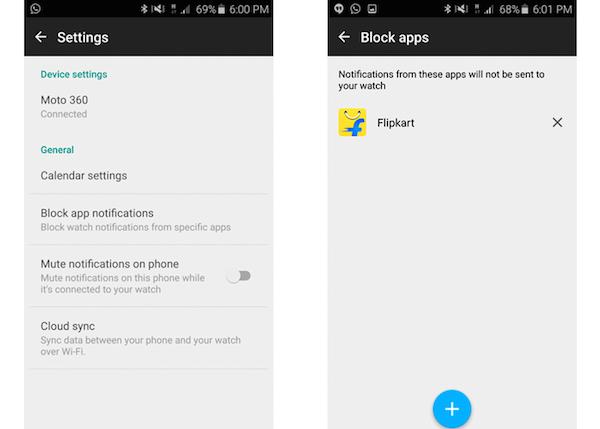 The fewer apps that keep vibrating and lighting up the watch, the more the battery will last.

7. If you don’t care for activity tracking, turn it off

Activity tracking on Android Wear is riddled with inaccuracies. For instance, Google’s own Fit app sometimes shows that I’ve cycled for 20 minutes, which it probably mistook for the times when I was crawling through traffic in a vehicle. If you don’t see any benefit of activity tracking features in your smartwatch, you can turn it off. The best it’ll do is save you some more battery.

In closing, it is obvious that Android Wear really needs to improve the battery life to use it like it’s advertised, without the fear of being stuck with a deadweight on your wrist before the day ends. But despite its flaws, it certainly is a good unobtrusive secondary screen experience.

This was a guest post by Rohan Naravane. Rohan is the Content & Product Head at PriceBaba.com. As is conveyed by the post above, he is determined to make smartwatches work and is waiting for the day when he can stop calling them a ‘beta’ product.