At the MWC 2015, Huawei has announced the second generation of the Talkband Fitness tracker. Huawei TalkBand B2 offers similar functionality to its predecessor, but the design has been made smarter and comes with touchscreen support.

The new band comes with array of sensors onboard, including a gyroscope which was missing from last year’s model. You can fetch the steps walked and distance jogged can be shown on the touch screen display. 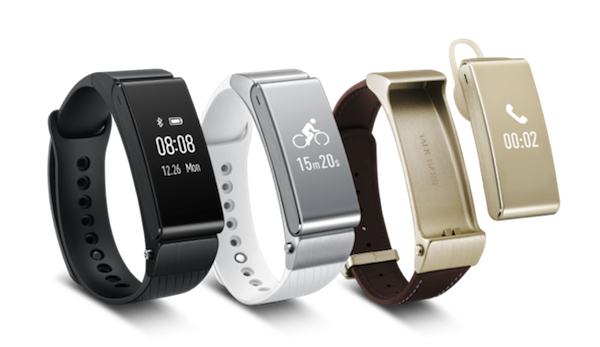 You can pull the B2 from the strap and use it as a Bluetooth headset for receiving calls. The strap can be either stylish leather or a more durable TPU based on the model you buy. There is a 0.7 inch display and touch support. The device runs Huawei’s own proprietary OS.

The TalkBand B2 is compatible with both Android and iOS. It can pair with two devices at any one time and battery life is around five days. The TPU based strap is IP57 rated which means you it can be used up to 1 metre underwater for up to 30 minutes. The leather strap is obviously slash resistant.

There is no mention on the pricing of these bands as of now. The band comes in black, silver and gold colors.

Tagged with: Huawei TalkBand B2