Makeblock’s mBot Review : A Fun Way to Get Kids Started with Programming & Robotics

I doubt there is anybody who never had a thought about having a small robot which can do things your way. As a matter of fact, we had played with robots in many ways. Take remote control cars for an example. We love them just not because they are cars, but because you can drive around the way you like.

Today, I am talking about my experience of mBot. It’s a fantastic and small robot which runs on wheels, but needs a bit of programming to get it work.  Whats the idea? It’s about getting kids attracted towards programming by letting them have something which they feel, and get hooked to. This generation of kids find it easy, mostly because they see similar things around all the time. My son been using iPad since two, most for solving puzzles. 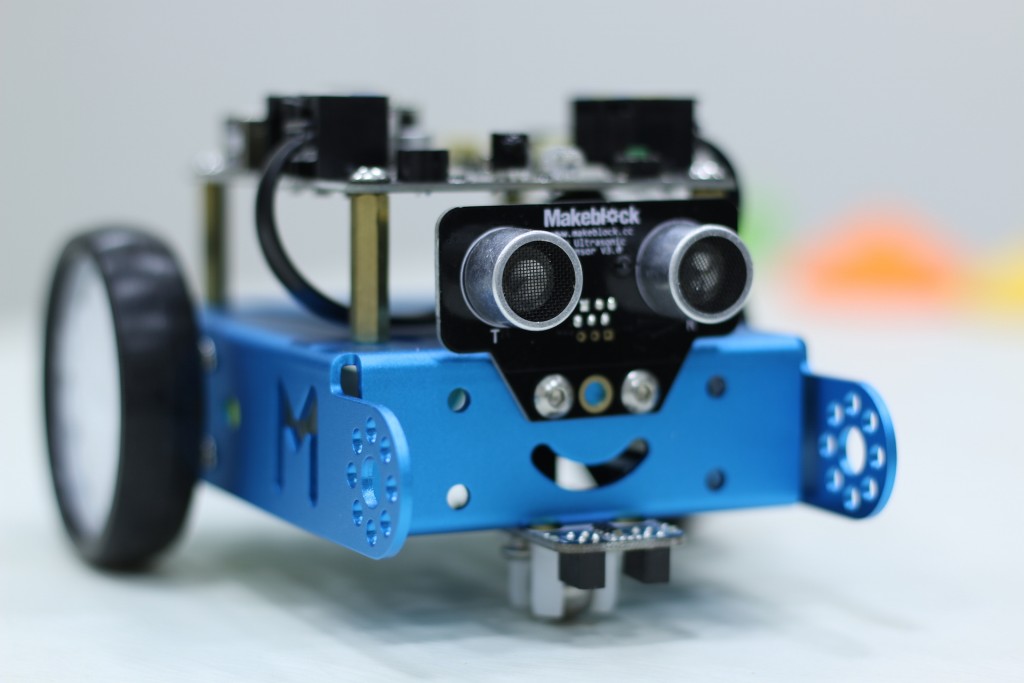 mBot for them it’s like a car, but they need to use bit of logic to make it run. Sounds fun? lets take a look at it.

PS: I was sent a mBot Kit to review, and hence this post.

When you pick something for your kid, you want to make sure it doesn’t hurt them. Kids are sharp, but they mostly ignorant.  When I first unboxed mBot,  I loved two things. First its rock solid, at least the basic building blocks, and second there are no sharp edges. These two things make sure kids don’t hurt themselves accidentally.

That said, this kit is for kids who can do a bit of logical thinking, know how to use computer, and will need a mentor to help them getting starred, and assembling the mBot. It takes around 30 minutes, if you aren’t used to this, else could be a matter of 15 minutes tops. You can ask kids to be around, and help them explain what they do. Once set, you will need 4 pair of pencil batteries to get it running. 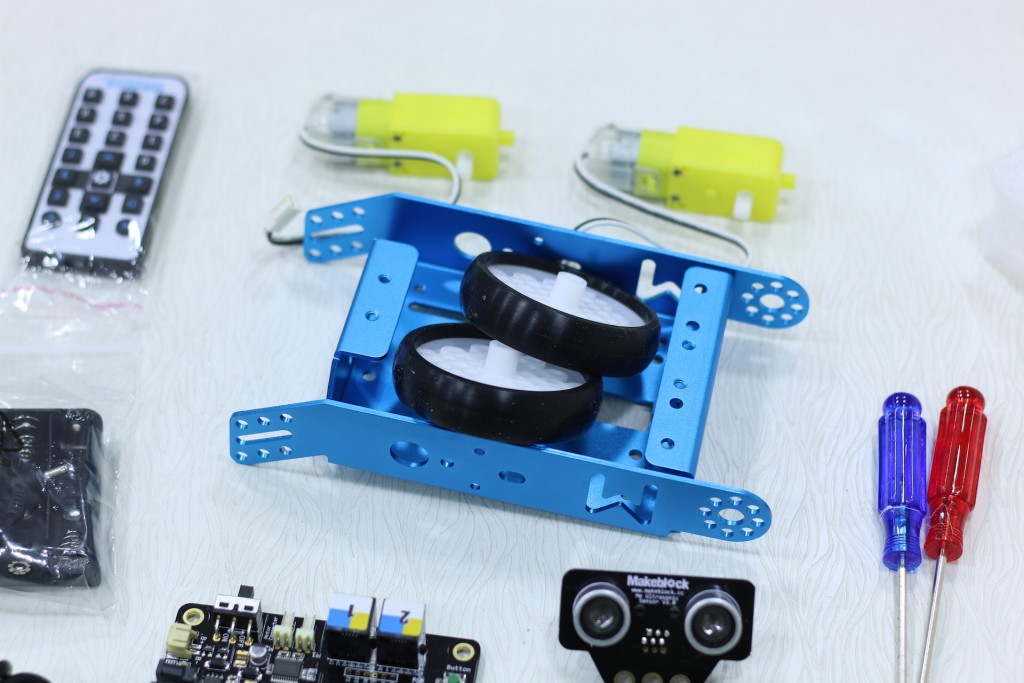 The third thing which I really liked about mBot was the human touch added to it. Once done, you get a smiling face which definitely attracts kids attention.  The fame has a mouth, you include the infrared eyes to complete a face. They come in Blue and Pink. Here is the list of things you need to assemble:

Making it Run, Programming and Logic:

Now comes a little tougher part, which is fun, but one needs to get used to it. The real challenge will be for kids to hook in. Why? They are used to things moving and getting controller by push of a button, but when they need to do stuff to make it run, things get boring. Lets meet the reality.

To programme mBot, you need to use mBlock. Its beautiful graphics programming interface with colours, logic that speak for itself. You have a beautiful panda to start which can walk, make sound and so on.  You can download from here. This is how the logical blocks sound like: 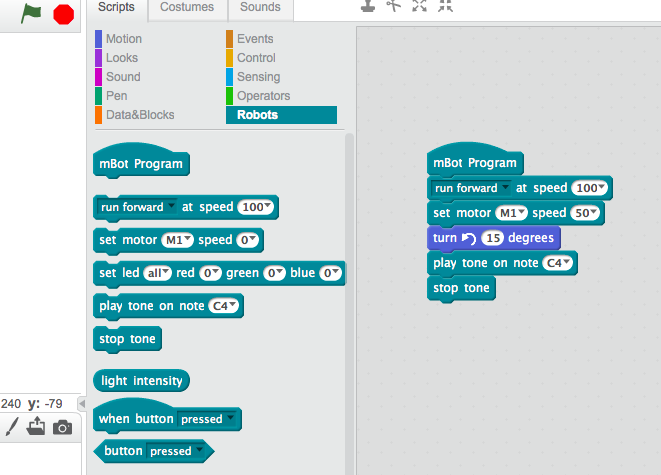 Once you are done with a basic program, you need to manually upload it to using the data cable that comes along with it. Once done, you can then either use the remote control or your keyboard on your PC to move it around over Bluetooth. 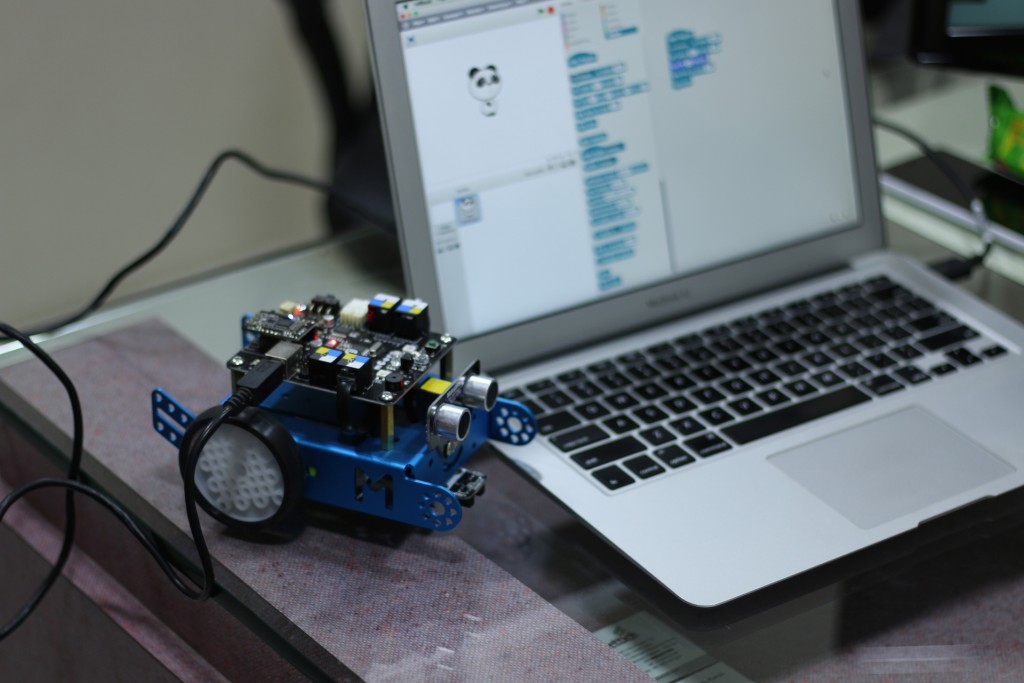 IMO, it’s not tough, but mentors have to get used to it. Tough is to get the kids hooked to it. You will have to spend time, and help them. The possibilities are immense. The bots can be used to follow lines,  fight with each other, kick balls, avoid walls and so on.

The kit costs $49 only. Its amazing value for money keeping in mind the quality of the product and things you can do with it. The price also syncs with their idea of One Robot Per Kid.  The project has completed their funding on Kickstarter. If you are looking to buy one, keep an eye on their page here. I totally loved mBot, and its one of the best Robotic Kits for kids to get started with it. More here