We haven’t heard much from Microsoft ever since they launched the Microsoft Band late last year. But the first major update is here and it brings in quite a lot of new features to this fitness band.

The Band users using Windows Phone 8.1 will be able to craft replies to text messages either by using the new Virtual Keyboard or dictate the responses using the Cortana powered voice dictation. The new virtual keyboard uses Microsoft’s World Flow technology, which predicts commonly used words and phrases. If you remember, Microsoft has been at the forefront for providing innovative solutions to smartwatch keyboards including Android Wear. So providing the good old QWERTY keyboard will surely raise some eyebrows. But the initial reviews have been quite positive.

There’s also a new Bike Tile which has been introduced for Band users. This lets the users track their rides both indoors and outdoors, on the road or trail. Opening the Bike Tile enables the biking mode which optimizes the continuous heard rate monitoring specifically for biking. It can also track elevation and calorie burn within the Microsoft Health app. Users can also activate GPS on their Band to map their ride in the mobile app and share it with their friends via email.

Microsoft has added a new web dashboard for Microsoft Health. This expands on the features already available on the mobile Health app. You can now see extended data views and more detailed charts on your health stats. 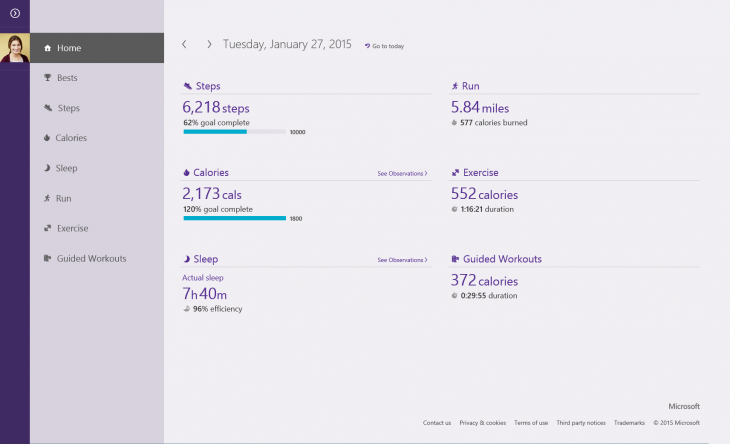 In addition to all these new features, Microsoft has also announced the SDK for Band. The developer kit will allow coders to begin creating their own apps for the tracker or better integrate existing apps. Right now only Windows Phone and Android is supported, and iOS support is coming soon.