This came as a little shock when we got to know that Nike might just ditch its future plans for FuelBands, a popular health tracker, which runs on company’s proprietary technology “Nike+ Fuel Lab”. The good news is that Nike will open up their platform to third-party making sure the platform never goes dead and most importantly become device independent.

Why Nike is ditching the hardware platform ? There is just one reason. Too many people wanting to grab the same segment and they are all divided. That’s two. The real problem lies is that every platform want their own hardware and their own software. This binds people to a product which is not cheap either. Switching is difficult.

Now that Android Wear has been announced by Google and partners like Motorola, LG have already proposed their smartwatches which comes with Fitness tracker and HRM, these bands might just look outdated. I use a Flexbit myself and I hate to replace that with my watch. The day my watch knows how to do it, I would switch.

Till Date, Nike+ App being exclusive to iOS but with the new line of thought, we should see the company working to integrate their platform and service into third part apps like RunKeeper, MyFitnessPal Strava and so on. This will give users a liberty to switch between apps and Nike to be available on every platform. 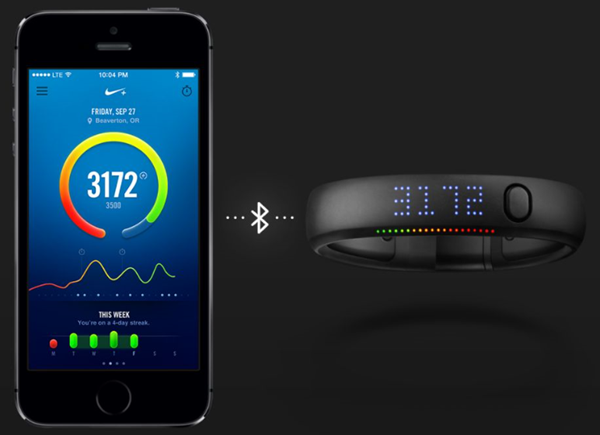 Nike is probably realizing this fact and invest into a platform that everybody can use rather than investing on hardware which wont last long. This will not only help to know what customers are doing for fitness but also help them design products. By integrating NikeFuel into third-party products, they expect over 100 million potential new athletes to join the club. Being a sportswear company, the data coming from all third-party apps will be a gold mine.

2014-04-12
+Ashish Mohta
Previous: Span : A Watch balancing the Smart Digital with the Beautiful Analog
Next: Wearables are Primed for Success, Set for Explosive Growth: IDC