Pebble is by far the most successful smartwatch. With the kind of start the new Pebble Time has got on Kickstarter, it’s not wise to ignore its success. Sadly, Pebble officially supports notifications for iOS and Android only, leaving the likes of Windows Phone and BlackBerry users in lurch. 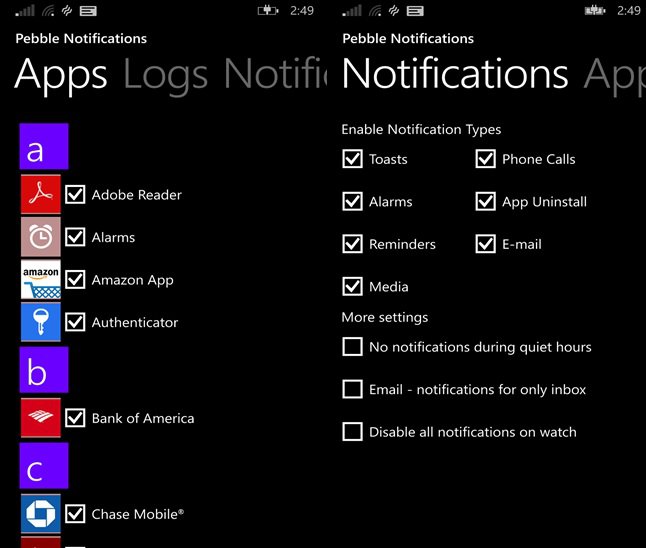 Apparently, Microsoft is taking things in its own hands as it is working internally on a Pebble Notifications app for Windows Phone. This internal test application was developed to get feedback on Accessory Ecosystem Support feature in WP Blue GDR1. The above images shows the app settings which lets user select the apps from which they will receive notifications and they can also customize notification types.

Although Microsoft is showing a lot of interest around wearables (they even released the Microsoft Band), the ecosystem support has been negligible, with no major third-party smartwatch player putting any effort to support the third most popular mobile operating system in the world. Of course there were the likes of Kreyos Meteor who promised WP support, but that’s no match to something like Pebble.

You can find the listing for the Pebble Notifications app here, but you won’t be able to download it at present as it’s being tested internally and not meant for public consumption.

Previous: Pebble Time Blasts Past $2 Million Within an Hour of Launch on Kickstarter
Next: Huawei to Showcase 4.5G & IoT Supported Smartband at MWC 2015