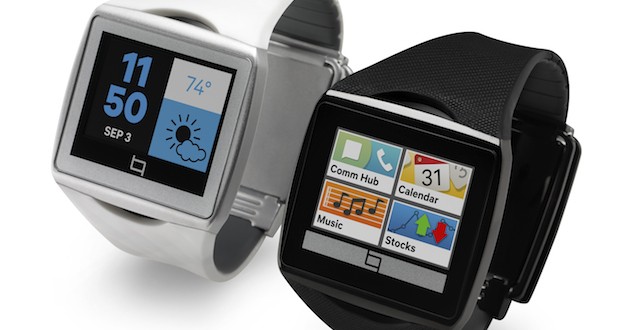 The Wearables market in general and Smartwatches in particular, is still in its infancy. Big companies like Sony and Samsung, and startups like Pebble have tried their hands in defining how smartwatches should be, with varied degree of success. Almost everyone see the Smartwatch as a companion device for Smartphones. But the challenge has been with regards to the battery life, as Samsung found out with its original Galaxy Gear smartwatch. Pebble tried to address that with an E-ink display ensuring the battery lasts for a few days at stretch, but at the compromise of letting go a bright, colourful and touchscreen display. Qualcomm claims to have nailed these issues with their Toq smartwatch. Today, we find out if there’s enough stuff to back their claims.

If we ask you to name the brands which come to your mind when we say wearables or smartwatches, we’re pretty sure not many would say Qualcomm. But the American semiconductor giant is known for its innovation. The Qualcomm Toq is aimed to be a showcase product which envisions Qualcomm’s view of how the Smartwatches should be. Other than the processor powering the Smartwatch, Qualcomm has developed a display technology specifically intended for wearables, along with a new wireless charging technology. 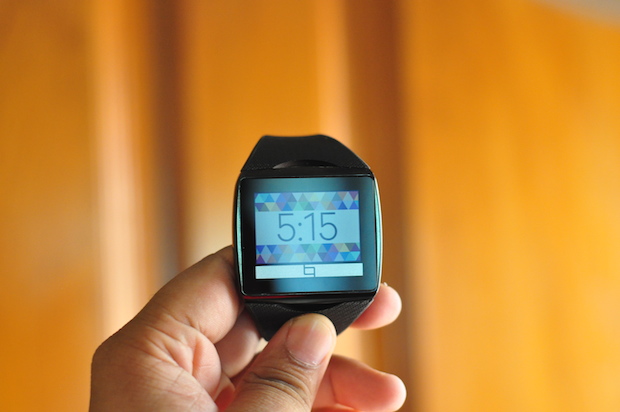 Make no mistake about it. Display is the main selling point of Qualcomm Toq. Like we mentioned before, Mirasol display tries to address the limitations of both e-ink and LCD/OLED technologies. No, Mirasol isn’t new. In fact, it has been around for a long time now, without seeing much success. It’s always touted as the successor to e-ink, because it’s a capacitive touchscreen technology with a superb refresh rate. Due to its extremely low power consumption, it can provide the extended battery life that comes along with e-ink technology.

Qualcomm realised that their Mirasol display suits smaller screens like smartwatches. The Toq comes with an impressive 1.55-inch 288 x 192 pixel display, which is so much better than Pebble’s e-ink screen. But we constantly yearned for smartphone-like crisp and brighter screens. Mirasol on Toq is a nice compromise owing to an impressive battery life, but it still remains a compromise. 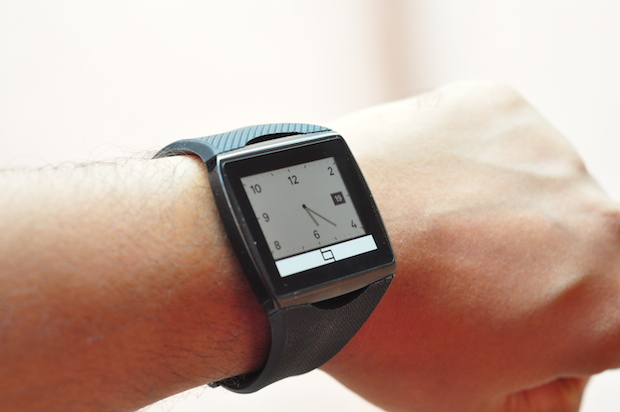 Thankfully, the display on Toq is Always ON (take that, Samsung) works great in almost all lighting conditions. Indoors, outdoors, badly-lit, direct sunlight – you name it, and it works great without straining your eyes. When you are in a completely dark room, you have an option to double tap the strap on top of the display to switch on the backlight. This is because of the way Mirasol works. Unlike LCDs, the display isn’t backlit by default, and actually uses the light around it to make it more visible. You can know more about Mirasol here.

One of the biggest challenges of smartwatches is their design. More often than not, they just replicate smartphones in their looks with blocky rectangular design, but with straps. Qualcomm Toq isn;t much different here. It carries forward the concept, but looks a lot more classy than something like Pebble, and even the Sony Smartwatch 2 to an extent.

But the problem with Toq is its size. Not only that its 1.55-inch display is bigger than most other smartwatches in the market right now, at 91 grams, it’s heavier than most. Thankfully, Qualcomm has balanced the weight in such a way that you don’t notice that all the time. But the sheer size made us conscious of carrying it around in public. 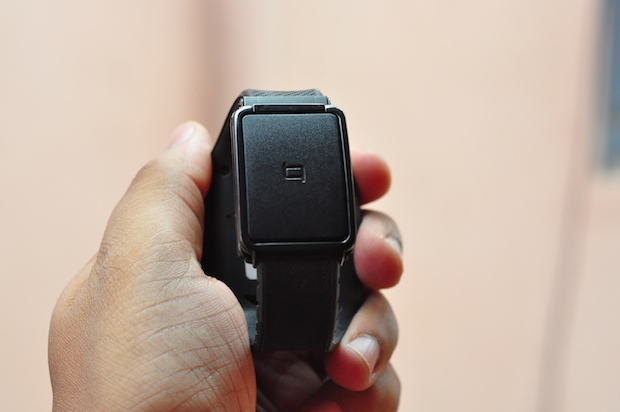 There are no physical buttons present on Toq. Instead, Qualcomm has provided a couple of sensors on the strap, right above and below the display. Double click above to kick on the display’s backlight or single tap below to access the main menu. The fact that these strap houses these two important sensors, means that users cannot replace them as they wish. Some people prefer a metal strap, while others prefer a soft silicone. Unfortunately, they are out of luck with Qualcomm Toq.

What’s even worse is the fact that the Toq’s band must be cut to size. That’s right. You need to pull out your scissors to cut the band to the correct length. The instruction leaflet tells you how to do this. So, in reality, Toq is meant to be a personal smartwatch and you can’t share with anyone else, unless their wrist size is similar.

The display on Toq looks pretty thin for a watch carrying 240mAh battery. But that’s because the display isn’t holding the battery. Qualcomm has moved the battery to the end of the strap and looks like a large clasp.

The 240mAh battery on Toq is nearly double than the 130mAh battery on Pebble, but less than Galaxy Gear’s 315mAh battery. Although Galaxy Gear has a much bigger battery, it hardly lasts a day or two. Thankfully, Toq’s battery is good enough to keep it alive and working for 4 to 5 days at a stretch.

This is primarily because, Qualcomm’s Mirasol display uses little to none power while idle. Unlike the Galaxy gear, it stays on all the time but only uses bare minimum battery. The 200MHz Cortex M3 SoC which powers the Toq also contributes to the lower power usage when not being used actively. We could easily get 5 days of continuous usage on a single charge with Qualcomm Toq. That’s very close to what we get on Pebble, but with a much bigger, better, colourful and touchscreen display.

Another cool thing with Qualcomm Toq is its wireless charging capabilities. You get a box like wireless charger when you buy the smartwatch. To charge, you need to open up the box, pull up the charging panel by clicking a button and simply set the watch down on its side in its little niche. The display switches to vertical mode to show the charging indicator. The charger uses Qualcomm’s WiPower technology, which is a resonant inductive method, and charges super-fast. It look just around 1.5 hours to get the watch charge from 0 to 100%.

The Toq is compatible with any smartphone running Android 4.0.3 or higher. We paired it with Sony Xperia Z2 via Bluetooth. The setup and pairing was simple and straight forward. We had to start off with downloading the Qualcomm Toq app from the Google Play store, and use the instructions to pair up with the smartwatch. 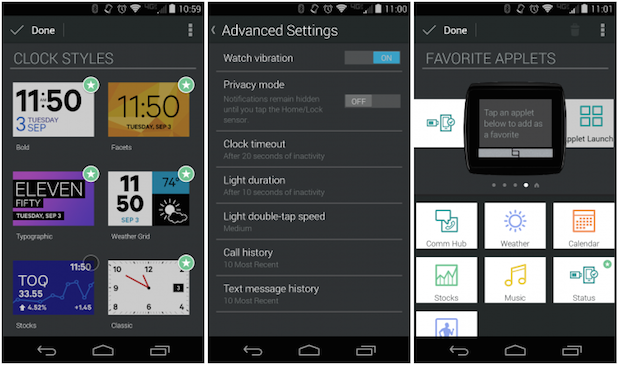 The app itself is well designed and easy to understand for a first time user. The Preferences section houses all the features and settings required to customise the Toq, including watch faces, menu, notifications and more. You get around 14 different watch faces to choose from, most of which look neat and useful. A few of them have additional information like weather, calendar or stock info.

By default, Toq serves up notifications on weather information, battery life, Bluetooth connection status etc. But others which land up on your Android smartphone get duplicated on to the Toq as well. One can pick and choose the apps which can send notifications to the Toq smartwatch. Most Toq-based notifications are just previews that won’t let you take action – essentially making the Toq more glanceable than interactive. But one can reply to the text messages using one of the many Quick Reply templates or even use the Voice to text feature to reply back. Also, we could answer or reject phone calls right from the watch which is useful at certain situations, but had to physically take out the phone to answer calls as Toq doesn’t support voice calls like Kreyos Meteor.

The UI within the watch is bit confusing to start with. We had to struggle to navigate through different screens as Toq employs gesture based touchscreen interaction along with the sensor pad which resides on the strap. 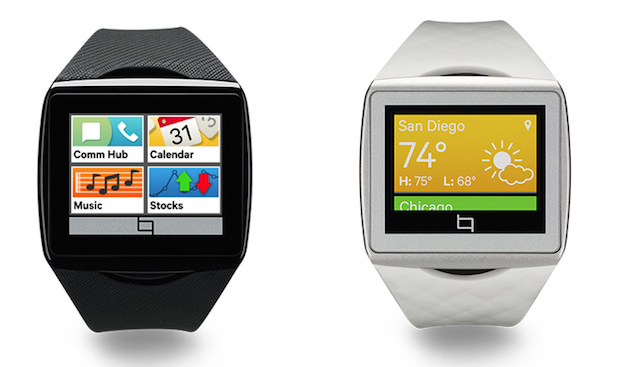 The interface is divided into horizontal and vertical pages that are accessed by swiping. You can swipe through the white band present on the lower part of the screen to alternate between various watch-faces. In order to go to the menu page, you need to swipe on the sensor pad on the strap. Then you can swipe vertically to check the various applets installed on the smartwatch. Tapping an individual applet icon will take you to the applet main screen.

Discovery involves tapping and swiping around. It’s somewhat confusing because the watch will display notifications containing snippets of e-mails or texts or other alerts, and you need to tap on them individually to get the full message. You will eventually understand the logic behind these interactions, but Toq definitely has a huge learning curve to begin with.

Qualcomm Toq comes with some basic applets pre-installed. This includes communications hub, calendar, music centre, a stock applet and an activity tracker. The communications hub houses the logs of your recent calls and messages. You can even use it to send a quick reply or compose a new one by dictating to the watch. You can scroll through the contacts and even place the call from the applet, but would need the phone to communicate.

The activity applet uses the pedometer present on Toq to count and log the data. You can use the smartphone app to check back these logs at a later date. The calendar applet uses Google calendar to get the latest appointments and does well to alert you at the right time. Music player is simple and works well. The Stock applet is basic and is only useful for market buffs. Sadly, there are no third party applets yet, and we hope Qualcomm ropes in developers soon to beef up the offerings.

Should you buy it? Well, that depends on your expectations. As a smartwatch buff, and as someone who has owned other smartwatches like Pebble, Metawatch and Galaxy Gear, I loved it. But that’s because, it addresses several annoyances I have had with my previous watches – like the always ON colourful touchscreen display, great battery life and wireless charging.

But Qualcomm Toq is far from being perfect. Qualcomm has made some weird design decisions. The unusually big display, with non-swappable straps and a clunky clasp can annoy a lot of people. The user interface is confusing and takes time to get used to. The applets are limited in number and hence limits the functionality of a smartwatch. All these makes Qualcomm Toq a hard sell at $349. Thankfully, they have dropped the price now to $249. That makes it a decent enough price, but we would recommend you to hold off for a bit, as we know that Qualcomm is partnering with other OEMs to bring their Mirasol display, WiPower wireless charging and other goodies on new smartwatch models.

The Wearables market in general and Smartwatches in particular, is still in its infancy. Big companies like Sony and Samsung, and startups like Pebble have tried their hands in defining how smartwatches should be, with varied degree of success. Almost everyone see the Smartwatch as a companion device for Smartphones. But the challenge has been …

Summary : Qualcomm Toq has a lot of good things going for it - like always on colour display, touchscreen, great battery life and wireless charging. But it's still not a complete product.