At the Samsung’s health event, called “Voice of the Body” the company has announced its latest wearable for healthcare, the SimBand. The hardware comes with a mix of sensors, data, and behavioral science that can give both consumers and healthcare providers a deeper and more complete view of human health. This new platform mixes both hardware and a cloud backend for sensor data.

SimBand is not a smartwatch, but a wearable device purely for health tracking. It collects lots of data to share with medical researchers, doctors, and for personal health use. SimBand is designed to be open and modular, and comes with a ton of medical sensors to get data. 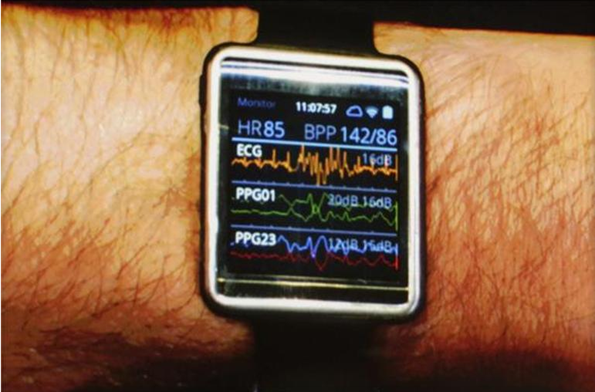 As of now this is just a prototype device and Samsung aim to go main stream some time later. This prototype device even comes with a ECG sensor. The device will be able to measure heart rate, blood flow, temperature, CO2 and oxygen levels, and even simulated blood pressure and display real-time electrocardiograph details. The current device is pretty compact and it has a 1Ghz 2x ARM A7 28nm chip along with WiFi and Bluetooth technologies for transferring data.

SimBand is designed as an open platform which means developers can create apps based on it and Samsung will be releasing the SDK in few months. With wearables all set for explosive growth in coming years, one of the major areas where it is going to shine is the health sector. This announcement comes few days ahead of WWDC of Apple where the company is expected to announce new wearable device and health platform.