Having used several fitness trackers in recent times, it’s clear that they are one dimensional. They help track your steps and general activities (albeit inaccurately) without telling you what to do with the tracked data. 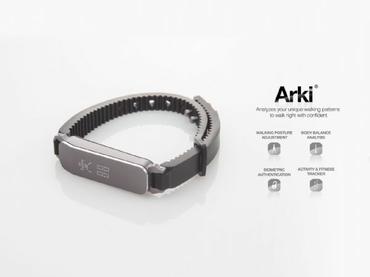 Zikto, a new Korean startup founded by six engineers from LG Electronics, Samsung Electro-Mechanics, SK Telecom and Shinhan Bank are set to change this with their new fitness band that can provide feedback on the wearer’s posture on Kickstarter next week.

Zikto “Arki” as it’s called, is the new wearable that goes a step further than trackers like Fitbit and Jawbone. In addition to tracking the numbers of steps walked, Arki will also measure the quality of the steps and adjust them to a healthy posture.

Firstly, when a user walks with an Arki Band, it evaluates the ‘healthiness’ of the walking pattern by analyzing the arm swing. If their walking posture score is below the threshold, the band will alert the users for a correction.

Secondly, it provides the status of your body balance. If you wear an Arki Band on your opposite wrist, it compares the symmetry of the swing between left and right arm. Then, it informs the user with a body balance report (ex: shoulder, spine, pelvis) and provides with a customized feedback to balance your body (exercise drills).

Arki does this through a machine learning technology called Body Balance Analysis that can measure how ‘warped’ the wearer’s shoulders, waist and buttocks are, and provide feedback on how to improve. The fitness band will come with standard features like pedometer, calorie counter and sleep tracking

Going by the available promotional pictures, Arki might not look too attractive, but it’s yet to get into crowd funding stage, so expect some changes along the way. The Kickstarter campaign is set to launch next week, and Zikto is hoping to raise $100,000 in funding, with the device priced between $99 and $129.